A Brief History of Sandwich

By Jonathan A. Shaw

Sandwich, the first town to be established on Cape Cod, was founded in 1637 by the persuasive and energetic Edmund Freeman. The location was appealing for the broad marshes bordering the sea resembled those of Sandwich, England, and were immensely valuable. With little effort the marshes could immediately provide salt hay for livestock, unlike upland or “English hay” which required cultivation by the settlers. Other reasons also may have appealed to Edmund Freeman and the men and women who joined him.

The land was part of Plymouth Colony whose Pilgrim founders were notably more liberal in their religious beliefs than the narrow-minded Puritans of Boston’s Massachusetts Bay Colony. Equally important, Edmund Freeman’s brother-in-law, John Beauchamp, was one of London’s ‘Adventurer’ investors in Plymouth Colony. Like today’s ‘venture’ capitalists, these men provided funds for the infant Colony and sought to encourage and profit from its success.

Approximately sixty families settled in Sandwich, and by 1639 they were building a Town House for civic and religious meetings. The town house site was at the corner of what is now River and Main Streets. It was on this site that Town Meetings and Congregational (and later Unitarian) Meetings were held for almost two hundred years until the Massachusetts State Legislature amended the State Constitution in 1833 to separate church and state; whereupon, in 1834 Sandwich erected the present Sandwich Town Hall, its Greek Revival architecture and massive columns evoking in Sandwich, as elsewhere in the nation, the birthplace of democracy. Soon after settlement a grist mill was built, essential for the grinding of corn meal and the well-being of the entire community. Though the earliest years were largely undocumented and uneventful, an initial land dispute required the presence of Miles Standish to ensure a fair division of the town’s lands.

By the 1650s Plymouth and Massachusetts Bay Colonies were becoming attractive to a new faith, the Religious Society of Friends (Quakers). Like most new faiths its members ardently proselytized. The Massachusetts Bay authorities reacted by banishing Quakers and finally in 1659 by executing them. Plymouth authorities undertook gentler steps of fines and other forms of retaliation.

Quaker Christopher Holder had arrived in Sandwich from England in 1657. Preaching the inner light as the source from God of personal and societal inspiration, he converted many Sandwich residents to the new faith, and the first Quaker Meetings occurred in Sandwich as early as 1658. Though Sandwich was under the thumb of Plymouth Colony and though the fines impoverished Sandwich Quakers, the movement continued to add new converts. The strength of the Quaker movement in Sandwich and the existing wide-spread religious ferment probably benefited from – and perhaps even caused – the 1653-54 departure of the Town’s first minister, William Leveridge/Leverich. The Quakers also benefited from the quiet and secret encouragement given them by many citizens of the town, including Edmund Freeman who, as a confirmed Anabaptist, believed that everyone had a right to choose baptism and one’s faith as an adult. In 1673, after a gap of almost twenty years, a new minister, John Smith, was chosen as Sandwich’s second minister. In agreeing to the appointment, the Reverend Smith required that he never be asked to “lift a hand” against the Quakers.

Today, Sandwich’s Quaker Meetings are the oldest continuous Monthly Quaker Meetings in America. In 1675-76 a conflict between the native Americans and the white settlers, known as King Philip’s War after its Indian leader, erupted across Massachusetts and neighboring areas. Sandwich and other settlements on the Cape and Martha’s Vineyard were spared from Indian attacks. Nevertheless, the fear of Indian attacks at the beginning of War or perhaps even earlier had led to the creation at the Wing Fort House in East Sandwich of what was probably a fortified palisade as a refuge and defense against Indian raids.

That Sandwich was spared during King Philip’s War was due to the isolation of the Cape Cod peninsula, the laymen missionary efforts of two Sandwich men, Thomas Tupper and Richard Bourne, and the loyalty of the friendly Native American population. Tupper and Bourne had learned the Algonquin Indian language and had helped to build Indian churches, and Bourne had been essential in establishing Mashpee and its Meeting House on the border of Sandwich as a legal tract owned by the Native Americans themselves and recognized under Colony law. Nonetheless, even in Plymouth Colony treatment of Native Americans changed in the aftermath of King Philip’s War. Three men found guilty of theft from a Sandwich resident, who in earlier years would have been fined or imprisoned, were sentenced to perpetual slavery to be used or sold by him as he saw fit.

During the Revolutionary War and the years leading up to it, Sandwich firmly supported the Patriot cause, but there were enough Tories in the Town to provoke factional disputes and discord. In 1773 the Patriots established the Town’s first Committee of Correspondence, and its seven resolutions were soon passed by the Town Meeting.

A member of the Committee was Doctor Nathaniel Freeman, who became one the Town’s and County’s most prominent Patriots. On Monday, September 26, 1775 Patriots erected a Liberty Pole, probably somewhere near the home of Melatiah Bourne who had given the timber for the pole. All day long men arrived in Sandwich from Rochester, Plymouth, Wareham and Middleboro. On the following day, September 27, at 6 a.m. the enormous assemblage, led by Dr. Freeman who had been chosen leader, in double-file order set out on the highway for the Barnstable Courthouse. Their purpose was to stop the Court, the Sheriff, and the Militia from acting in the King’s name. By 10 a.m. Freeman was on the steps of Courthouse surrounded by a crowd of a thousand or more. During the day and into the following morning all thirteen Justices signed agreements defying the Acts of the English Parliament, and the Sheriff resigned.

On that same September 28, word arrived that the Sandwich Liberty Pole had been cut down. Twenty-two Patriots were immediately sent to Sandwich to apprehend the perpetrators. Three were captured and forced to help re-erect the Sandwich Liberty Pole. On the evening of October 5 Dr. Freeman, who lived near the Old Town Sandwich Burial Ground, received a somewhat suspicious message that a patient required his attendance. He set out on foot and passing by the Newcomb Tavern on his return he was severely beaten by six men, all Tories, and bleeding about the head from a long cut he was rescued by friends and carried home. Because the culprits were in danger of being lynched, they were immediately tried, fined, and released, but with mob violence against them still threatening, several leading citizens of Sandwich had them re-arrested and brought to the Sandwich Liberty Pole where Dr. Freeman’s assailants signed a confession, and the danger of mob violence subsided.

The Newcomb Tavern, the site of the attack on Dr. Freeman, was well known as Sandwich’s Tory Tavern. Brigadier General Timothy Ruggles lived in Sandwich for many years and had become owner of the Tavern after his 1735 marriage to the widow Bathsheba Newcomb. In 1778 when Massachusetts published a list of the three hundred most despicable Tories in the State, Ruggles was the third on the list. He left Sandwich some years before the Revolution, and when George Washington’s army forced the British evacuation of Boston, he wisely fled Massachusetts for the British sanctuary of Nova Scotia.

Over the years the population of Sandwich, which was primarily agrarian, Protestant, and of English origin, grew slowly. In 1825 that began to change. Boston entrepreneur Deming Jarves, after seven years as manager for a newly created Boston glass manufacturing firm, decided to establish a glass factory more fully under his own control. Sandwich was selected “for the proposed canal allowed safe shipping to the New York market, the abundance of wood the fuel for his voracious furnaces, and the proximity to Boston convenient business opportunities in both locations.” He established offices in Boston, raised capital there, and called the firm the Boston & Sandwich Glass Company. The firm grew rapidly and by the end of the 1840s had created in Sandwich one of the largest glass factories in the United States.

Sandwich (pop. 20,675, 2010 Census) is Cape Cod’s oldest, and one of its most picturesque towns. Located on the Upper Cape, it is convenient to attractions on either side of the canal.

The charm of yesteryear has not left this historic village. Its town center boasts beautiful old homes, some of which have been converted to inns, B&Bs, shops and restaurants.

The villages of Sandwich are East Sandwich and Forestdale. A section of Joint Base Cape Cod is also in Sandwich.

As the Cape’s oldest town, it is not surprising that Sandwich is bursting with historic sites and museums. The Thornton W. Burgess Society pays homage to Sandwich son, naturalist and author of Peter Rabbit, Thornton W. Burgess. The society also operates the Green Briar Nature Center, which offers a wide variety of festivals (herbs, cranberries, strawberries & blueberries), workshops, lectures, and classes for children, adults and families.

You can learn about maritime history and the history of the Cape Cod Canal at the Cape Cod Canal Visitor Center at Sandwich Marina. Operated by US Army Corps of Engineers park rangers, the center features fascinating exhibits, films and hands-on exploration. They also offer an impressive schedule of walks, talks and children’s programs during the summer.

Glassmaking was started in Sandwich by Deming Jarves in 1825 and today, glassblowers still create magnificent works in studios along Route 6A. Check out the Sandwich Glass Museum, where you can check out glassblowing demonstrations and its collection of over 6,000 pieces of glass produced between 1825 and 1888.

Sandwich is a great place to visit if you love the outdoors. There are three public beaches; Town Neck Beach, Sandy Neck Beach, and the fresh water Wakeby Pond. The Sandwich Boardwalk is a favorite for visitors and residents alike. The Briar Patch at Green Briar Nature Center features beautiful walking paths and gardens. Shawme-Crowell State Forest, operated by the state, offers camping and extensive hiking. The Cape Cod Canal Bike Path is a wonderful stretch for biking, walking, jogging and rollerblading. Watch the boats big and small cruise through the canal. 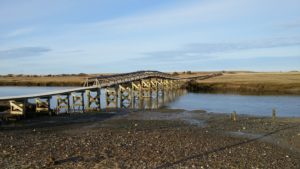 If you love antiquing, you’ll love Sandwich and its many quaint shops. Sandwich also has a thriving arts community and artists working in a variety of media sell their wares in shops, at shows and in studios throughout town.

Folks in Sandwich enjoy year-round activities including outdoor summer concerts at the Wing School, flea and farmers markets, but there are two highlights–the annual Holly Days holiday celebration and the SandwichFest in June featuring the (you guessed it) best sandwich in Sandwich.